From experiencing new cultures to trying new cuisines, there are countless reasons to travel. Â One of my favorite things to experience during a trip, and something Iâ€™ll often go out of my way to get to, is a festival. Â Be it cultural, music or something else, festivals are exciting because they only temporarily exist at a special place and time, often with an energy you canâ€™t really explain. Â Such was the case with this yearâ€™s Sundance Film Festival in Park City, Utah. William H. Macy giving an interview about his film “Rudderless”.

Having started 30 years ago, the Sundance Film Festival is well known for its association with Robert Redford and itâ€™s focus on independent films. Â Over 12,000 films were submitted for this yearâ€™s festival with 121 features and 66 shorts being selected to run during the festival. Â A total of 21 Utah theaters, 14 of them in Park City, screen these films over a 10 day period from mid- to late-January. Â Long lines and heavy traffic are a hallmark of the early part of the festival, but the people thin out as the festival nears the end.

I have had two completely different experiences at Sundance. Â I first attended about seven years ago while working for a producer in Hollywood. Â We came up with a client who was sponsoring a party, and my duties kept me so busy during the festival I didnâ€™t really have a chance to experience much of it. Â This time, however, I was on my own and took advantage of the flexibility that offered to wander and focus on what interested me. 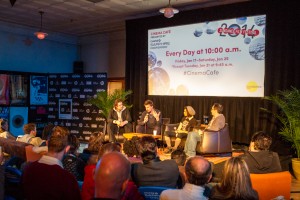 A panel discussion with four indie filmmakers discussing their films.

I started by taking in a panel discussion where four filmmakers were discussing their films and filmmaking in general. Â From there I found some free food sponsored by Chase before heading up to meet up with a friend from Los Angeles who was working the festival. Â After catching up and getting the lowdown on what to check out, I found the AirBnB house and grabbed a coffee before heading to â€œThe Sourceâ€, and art-like setup with short clips of Doug Aitken interviewing a wide range of individuals about where the creative idea starts. Â I finished my day at a pop-up festival cafe showcasing three hours of music. The band Clara-nova performs at the Sundance Cafe sponsored by ascap.com.

For those who might be interested in attending in future years, unless you are a fanatic about films, I would recommend going towards the end of the festival. Â The later you go, youâ€™ll have less industry people to deal with, less traffic and more access to films and other festival activities. Â Of course, if your goal is to rub elbows with celebrities and be at the premieres and parties, get there early and be sure to purchase a badge that will give you the access you are seeking.