One of the greatest parts of international travel is having the opportunity to experience the fascinating and diverse world of food. From Okonomiyaki to Pad See Ew, thereâ€™s nothing like encountering a cuisine in its native country.Â  The night markets of Asia are a destination unto themselves and a stop every flashpacker would be remiss to overlook.Â  Luckily, a local version of the Asian night markets has sprung up in Los Angeles.Â  Albeit temporary and inferior to the real thing, the â€œ626 night marketâ€ does have several good things going for it.

As anyone whoâ€™s traveled through Asia knows, the best food is usually found on the street.Â  The food carts of Thailand and make-shift pho restaurants on the streets of Vietnam might not be as sanitary as the kitchens in the western world, but it would be hard to argue against the quality and flavors of the food.Â  Made to order from the freshest ingredients, youâ€™ll find a wide variety of food and drink at night markets all over Asia., and at a quarter of the cost (or less) than the corner restaurant.

Back in the United States, we donâ€™t have the luxury of including street food in our dietary options.Â  Safety regulations and sanitary requirements keep most of these possibilities in check.Â  The closest things we have now are the food trucks that have been popping up all over the country.Â  To fill that gap, some local Angelinos have organized the 626 Night Market, whose concept is to â€œbring a little bit of Asia to Los Angelesâ€. 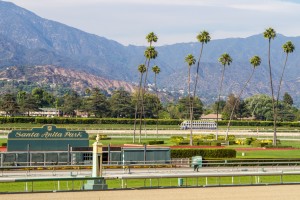 The view of the track at Santa Anita Park

The 626 Night Market is scheduled to take place three times in 2013, with only two weekends left on July 6th & 7th and August 3rd and 4th.Â  It is held at Santa Anita Park, a thoroughbred racetrack that opened in 1934 and has been a landmark in Southern California ever since.

Arcadia is an affluent area of Los Angeles located about 13 miles northeast of downtown.Â  Ranked 7th in the nation in CNN Money Magazineâ€™s 2012 list of cities with the highest median home cost, the racial makeup was 59.2 percent Asian as of the 2010 United States Census.Â  When you think about it, combining the landmark venue of Santa Anita Park with an area containing many people of Asian descent, it was only a matter of time before this kind of event came about. Alice and the Mad Hatter in attendance at the market.

Walking through the gates of the racetrack, my first thoughts are ones of nostalgia.Â  Arcadia was the city I grew up in and spent the first 20 years of my life.Â  My grandfather was a regular at â€œthe trackâ€ and my brother and I were frequent visitors as kids.Â  Weâ€™d go and play in the infield while grandpa made his bets on the horses.Â  When we were older, weâ€™d attend concerts and beer garden festivals in the infield.Â  Needless to say, I have fond memories of Santa Anita.

When I heard about the 626 Night Market, I knew it was something Iâ€™d want to check out in the hopes it would please those tastebuds hankering for a bit of the flavors Iâ€™d had in Asia.Â  Upon entering, however, my initial thoughts were that Iâ€™d entered a warped version of a county fair, this one with an Asian theme.Â  Pop-tents were commonplace and the first thing I caught sight of was a booth selling cheap merchandise.

That changed quickly as I wandered through the various food tents.Â  I couldnâ€™t completely tell the differences between many of the tents, but I would estimate that about 60% were providing some form of Chinese food while the other 40% might be split evenly between Japanese, Indonesian, Korean, Thai, Fusion, and even American. A couple tacos from the Kogi BBQ food truck – Delish!

The first thing I tried after wandering around and looking at my options were a couple rice balls from a booth called â€œBomb dot comâ€.Â  Upon reading the description I was expecting something akin to Takoyaki but with a Korean flair.Â  It was tasty, but fell flat with little octopus and mostly rice.

Unsurprisingly, a number of Los Angeles food trucks were in attendance, including the famous Kogi truck. I simply couldnâ€™t call myself an Angelino if I passed on the opportunity to grab a couple Kogi tacos as my next little meal.Â  I sat and munched on these while watching some DJs provide entertainment to the crowd.Â  This was one of two â€œstagesâ€ that had performers and was located in the southeast corner of the event. Potato on a skewer from the Hotopotato booth.

Another pass through the lanes of the market brought me to the Hotopotato tent, which served a potato spiraling around a stick, fried, seasoned and ready for dipping.Â  These things appeared to be everywhere, which was interesting as it seemed very American to me.Â  I decided I only had room for a couple more food items and wanted to make them count.

Okonomiyaki (Japanese Savory Pancake) and Takoyaki (a common street food in Japan made of batter and filled with octopus and other tasty bits) where the two things Iâ€™d passed by that I knew I must have before leaving.Â Â  The Okonomiyaki was good, but I think itâ€™s better in a restaurant setting, with more options than what was available there.Â  The Takoyaki was good and scratched an itch Iâ€™ve had since I left Osaka. Quite possibly my favorite street food, Takoyaki is tasty.

While the 626 Night Market is in no way like any of the night markets Iâ€™ve come across in Asia, thatâ€™s okay.Â  It is what it is â€“ an inspired, American version of the markets abroad.Â  While the entertainment and merchandise is lacking, the food is worth the trip.Â  Spend some time wandering and finding a couple of new things to try.Â  Be sure to leave room for your favorites.Â  Iâ€™m happy to see something like this crop up in Los Angeles, and even more thrilled itâ€™s in my hometown.Â  If youâ€™re in Los Angeles the first weekend of July or August, head down and check it out.