The City of Angels is a must visit destination on any traveler’s list, due in no small part to the sheer number and variety of activities, food and experiences available. When out flashpacking, I usually describe Los Angeles as a patchwork quilt, with different neighborhoods offering vastly different experiences. Take a drive from Santa Monica to Pasadena and you’ll go through over a dozen areas that vary widely in culture, income, food, attractions and more.

According to the Los Angeles Tourism & Convention Board, a record 42.2 million people visited Los Angeles in 2013. I imagine many of them did the stereotypical tourist activities of visiting disneyland and wandering down Hollywood Blvd. LA has much more to offer and my goal here is to have you go do the things I would suggest to any friend coming in for a visit while also passing along a bit of insight into the city of Los Angeles. The gardens at the Getty Center are a great place to wander or relax with a book.

The number one suggestion I have for anyone visiting is to take a trip up to The Getty Center (aka. The Getty). A combination of art, architecture, gardens and amazing views await anyone willing to brave the 405 freeway (referred to not-so-affectionately as “the 405”). The 405 is on many lists as having some of the worst traffic in the world and a friend relates it to the “The Wall” in Game of Thrones for the way it splits an area known as “The Westside” off from the rest of Los Angeles proper.

Worth the hassle, The Getty won’t disappoint any time of year. However, clear and windy days offer the best views of Santa Monica and Venice. From Vincent Van Gogh’s painting “Irises” to the rotating photography exhibits that I love, there is art that appeals to just about any visitor. The Getty offers special events year round so be sure to check their event calendar as well. “Saturdays off the 405” is a recurring event where musicians do their thing in the courtyard.

Admission is free but you do have to pay parking. Closed Mondays. The Venice Beach Boardwalk draws large crowds and is great for people watching. Image by Oz Mendoza via Flickr.

The beaches and boardwalk of Santa Monica and Venice Beach are usually my next recommendation. There are few places on earth for people watching like Venice Beach. A sidewalk circus of street performers, muscle heads, surfers, skaters, and medical marijuana peddlers all fuse to create the sideshow that makes Venice Beach famous.

At the other end of the boardwalk is Santa Monica pier and the third street promenade. While street performers take up residence on the promenade, shopping is the key attraction here. What used to be small chains and boutiques is now filled with mainstream chains like Abercrombie & Fitch and The Apple Store. There’s also plenty of great food to eat, including my recommendation: The Border Grill from “Top Chef Masters” Mary Sue Milliken and Susan Feniger. 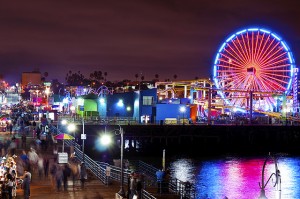 The carnival atmosphere of the Santa Monica pier attract locals and tourists alike. Photo by Steven Bevacqua via Flickr.

The best way to experience this area of Los Angeles is to get out early on a Sunday and rent a bike from the Santa Monica Bike Center. Take a leisurely ride down the boardwalk to Venice beach and find a spot for brunch or mimosas. Stroll around and experience all the Venice boardwalk has to offer. Ride back up to the pier stopping by “the Green”, an area just south of the pier where acrobats and aerial artists practice their routines (Sundays after 3pm are best). Return your bikes and then wander through the Promenade or head down to the pier to finish off the day.

I understand the need for a first-time visitor to Los Angeles to see the Hollywood sign and do a little stroll down Hollywood to see the “walk of fame”. I get it. Skipping it would be like going to Paris and not seeing the Eiffel Tower. Since I know this will be on your itinerary anyway, I have a few suggestions on how to best go about this. 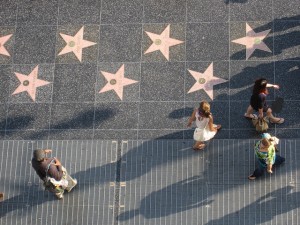 The Hollywood Walk of Fame is one of the top attractions for any tourist, though I must admit I never understood why. Photo by Wieland Van Dijk via Flickr.

First off, you will most likely want to have your own vehicle since I’ll be suggesting a few items difficult to experience using mass transit. The old 80’s song “Walking in LA” is still accurate to this day. While our mass transit is being upgraded, it is a far cry from most other global travel destinations. Pricey, but interesting, alternatives to renting might be Uber or Lyft.

Wheels in hand, you’ll want to start out in the modern Hollywood and Highland shopping complex. Underground parking is cheap by LA standards and you’ll emerge onto the Walk of Fame. Mann’s Chinese Theater, where the celebrities put their hands in cement, is attached to the shopping center and you’ll find a variety of costumed characters out front itching for pictures. Jimmy Kimmel Live, the El Capitan Theatre and the Roosevelt Hotel are all across the street.

Take your time and explore the area. A number of tour busses all leave from here as well, if that’s your thing. I’d simply suggest walking a few blocks east to Hollywood and Vine before crossing the street and retracing your steps to the car. Upon leaving Hollywood and Highland you’ll drive east along Hollywood Blvd. to a shop called “Wakko”, where you can explore a very special store that is, by far, one of my favorite places to send a visitor. Tap into your artistic side at the La Luz de Jesus gallery while immersing yourself in pop culture at Wakko. Photo by Alex Gibson via Flickr.

Around for over 40 years, Wakko is a “megastore for the pop connoisseur” and is one of the most interesting shops I’ve ever visited. Filled with books, toys and all manner of kitsch, they even have a gallery in the center of the shop called La Luz de Jesus. Specializing in the lowbrow art movement, you’ll find a monthly exhibition as well as numerous pieces from previous exhibitions and group shows. If you are looking for a fun gift or souvenir from your trip, this is a great place to get it. Umami Burger is located on the same block and has one of the best burgers in Los Angeles.

When evening hits, drive back through Hollywood, this time west down Sunset Blvd. Once you cross Crescent Heights you’ll officially be on the Sunset Strip. While the strip is only roughly two-and-a-half miles long, it contains restaurants, boutiques and rock clubs galore. Drive through this stretch of Los Angeles once to ogle at the billboards and then head back and walk it. The Viper Room, Roxy, Key Club and Whiskey-A-Go-Go are all located here if you’re interested in a show and there’s plenty of options for food. For a great summary of the history of the strip check out the documentary on Netflix. The CicLaVia event is a golden opportunity to experience the city in a unique way.

One of my favorite aspects of Los Angeles is that there is always something happening. If you can time your visit with an exciting event, you’ll get to experience something special and see a wider spectrum of the people who live here. See if you can attend the Brewery Art Walk, CicLaVia (check out my CicLaVia Photo Essay), or get down to West Hollywood for Halloween.

The Brewery touts itself as the World’s Largest Art Complex. Once a power plant that became a Pabst Blue Ribbon brewery, it now houses over 500 artists. Twice a year, in April and October, the residents open their doors for a weekend and the city descends upon the place in a frenzy of art appreciation. Get their early if you don’t want to deal with parking and bring money if you’re interested in purchasing some art.

CicLaVia is a reoccurring event held multiple times a year in different parts of the county. The city shuts takes a highly trafficked route and closes it to cars for a single day. Walk, skate or bike, this event is quite possibly the only way for a flashpacker to experience the city without any motor vehicles. Go grab a bike and see the city in a different way. You won’t believe the people and costumes you’ll witness during this one night of the year.

Halloween Carnival in West Hollywood is an experience that needs to be seen to believe. Promoted as “the largest Halloween street party in the world”, you too can share the streets of West Hollywood with 500,000 costumed merrymakers. By far, the most interesting and elaborate costumes I’ve ever seen have been part of this parade of people. Don’t forget your camera.

In my opinion, Los Angeles is one of the best food cities in the world. The major problem with food in Los Angeles is the best stuff is scattered all over the county. Want dim sum or soup dumplings? Head out to the San Gabriel Valley. Hunkering for Korean? Korea town has everything you could hope for. Japanese, head out to Sawtelle Blvd., one of my favorite haunts for Ramen, Okonomiyaki, and some of the best boba in town. Referred to as “Little Osaka”, Sawtelle Blvd. on the Westside has some of the most amazing Japanese cuisine I’ve had anywhere (and I lived in Japan for a year).

While there are areas that concentrate on certain cuisines, if you’re looking for something unique, your best bet is Yelp. My foodie friends all have their preferences for anything you could think of. From pizza to vegan to sushi, there is an amazing restaurant for you, as long as you know where to look. When in doubt, look up LA’s most well known food critic Jonathan Gold and see what he has to say.

As you start planning your trip to Los Angeles, one of the first things to consider is where to stay. If you follow my suggestions above, the best spot for you to use as a base will be Santa Monica. It is close to the beach, has a lot of shopping and food options, and isn’t too far to the Getty and Boardwalk activities I discussed above. If you are staying elsewhere, be sure to keep an eye on transportation options and traffic for the activities you have planned.

The Final Say on Los Angeles

Los Angeles being a place where you can see and do just about anything, I have focused here on the activities I would rank at the top of my list of recommendations for anyone visiting the city. These are all things I love about LA and would go do with you if I were in town. By all means, get out to Disneyland or do a studio tour if you prefer those over what I’ve mentioned above. Just be sure to visit Los Angeles with some idea of what you want to do, where you want to stay and how to get around the city.

Have a question about Los Angeles?  Leave a comment and I’ll answer as best I can.