I am happy to announce I have the privilege of hosting the Travel Photo Roulette contest for the third time.  Having previously won rounds #3 and #43 means I hosted the “festival” theme for round #4 and the “once in a lifetime” theme for round #44.   My most recent win was for round #91 with the image above for the “Inspire” theme hosted by Hannah and Adam of GettingStamped.com.  If you don’t know what Travel Photo Roulette is, here’s an idea of the contest:

The contest migrates from blog to blog based on the idea that the winner of the previous contest hosts the next one.  I get to host round ninety-two because I won round ninety-one.  As host, I get to choose a theme for the next round and bloggers can submit a single entry based on how they interpret the theme.  The time frame for submissions is generally one week.  At the end of the week, the host blogger will chose the winner for that round and said winner will then repeat the process on their own blog.  Readers can always try and sway the host via comments during the contest, but the host is free to give as little or as much weight to people’s opinions as they wish.

I went back and forth quite a bit on what to go with for this round’s theme and decided to go with something a little more interesting photographically.  This week’s theme is going to be “Viewpoint – Up and Down“.  The idea is to share an image where you had to alter your viewpoint and think differently to get the shot.  I feel one of the concepts that really helps photographers grow is to think outside the box and look at things from a different viewpoint, particularly when it comes to subjects that are heavily photographed.  For this theme specifically, I’d love to see shots that were taken straight up or straight down. Check out a few of the examples below for what I’m talking about. Shooting straight down into a succulent at an aboretum in Monte Carlo.

Shooting straight up into an alternative christmas tree display at a hotel in Sri Lanka.

Entering the contest is super easy.  Just leave a comment below with a link to the image with an up or down viewpoint you’d like to submit and a caption or description of the image to help flesh it out.  Tell us what you were thinking about when you took the shot.  Was this just an experiment that went right or something meticulously planned out? Once you’ve added your comment, I’ll add the image to the submissions.  Don’t forget to check back in during the week to see the other submissions and join the conversation by leaving comments for others.

The contest runs for 7 days starting December 15th and ending December 23rd at 12:00 PST.  The winner will be announced within a few days of the end of the contest and the selected blogger will then host round #93.  Please do your best to keep your images to a nice, medium size and be aware that anything too wide will be reduced in size.

The Rules for Travel Photo Roulette

1) One submission per Blog (so sites that have 2+ authors only get one entry).

2) No photoshopping allowed unless specifically called for!  Cropping and correction for red-eye or camera flaws are ok, however.

3) Abstract submissions welcomed as long as it fits within the interpretation of the chosen phrase.  Remember, the hosting blogger chooses the winner, so if they cannot understand the submission, you might not win!

4) Keep phrases general so that all bloggers can participate.  Specific items like “Eiffel Tower” should be avoided but rather made open-ended like “monuments.” For variety, it is ok to say focused things such as “monuments at night” in which most of us have pictures of.

6) Abstract thoughts are appreciated, but keep it within the realm that all readers will understand.  No “Kafka-esque”, but “Overlooking Creation” is able to be interpreted by all.

7) No obscene pictures or phrases allowed.  Suggestive phrases and photography can be accepted, but please keep it within reason.

8) After a sufficient period of time, phrases can be reused, however new photos must be submitted.  Keep the ideas and photos fresh!

9) Pictures from your entire portfolio are fair to submit.  You do not have to take the photo within the week of the contest period to submit it.

10) Most importantly, ALL PHOTOS MUST BE YOUR OWN.

After a lot of consideration, I’ve decided to go with Greg’s image of the Virgin Mary statue holding the sun.  There were many great images submitted for this week’s theme, however, I kept coming back to the way Greg had to shift his perspective to position the two different elements in the image.  Congratulations to Greg!  I can’t wait to see what he’ll pick for the next theme! 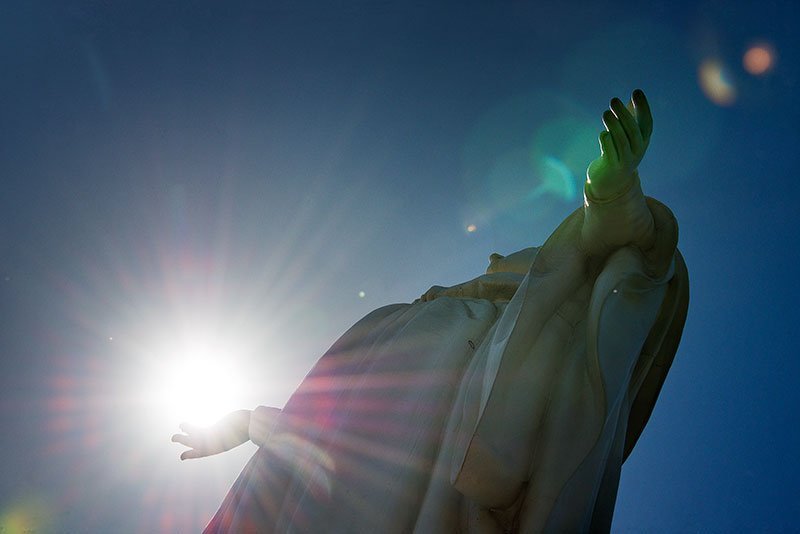 From Suzanne of The Travelbunny:

Istanbul’s Sultan Ahmed Mosque known as The Blue Mosque because of the exquisite blue-tiled domed ceilings. The best way to view them would be to lie on the floor and look straight up – I didn’t quite have the nerve….

From Josh of Peanuts or Pretzels 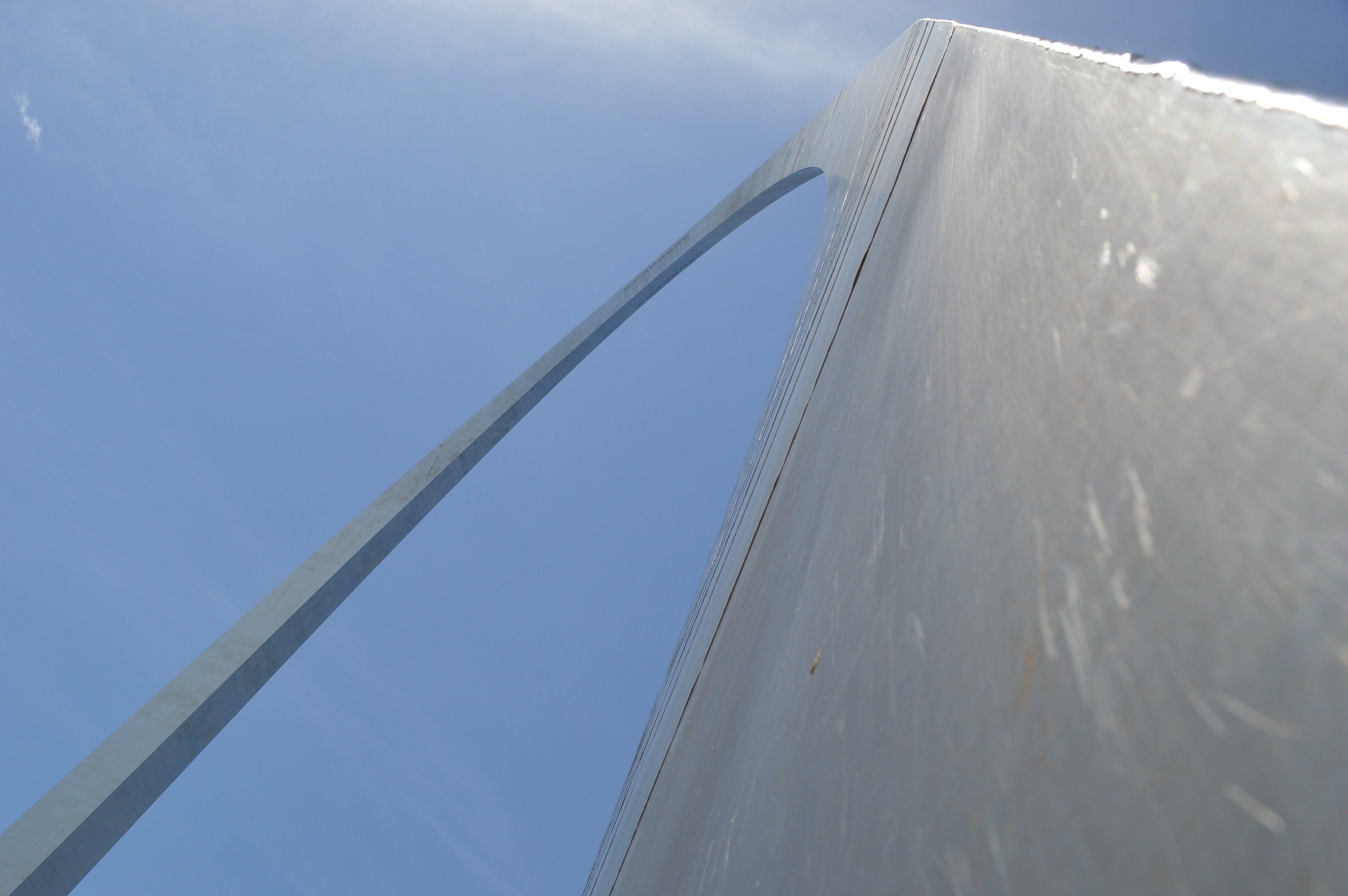 Here is a unique view of the St. Louis Arch. Many of us have seen the Arch, either in person or in photos, so you are familiar with it’s shape. But have you ever seen it from this view point? It looks totally different up close. You discover the shape is slightly different, and can appreciate the craftsmanship to lay each piece together. It’s kinda crazy to think you can ride an elevator up inside to the top!

From Alexandra Pucherelli of Fluent in Frolicking

Beauty really is everywhere. I was recently at the dump and right there next to the trash loading dock was this banana tree. It was in bloom and the flower was just so bright and colorful. So alive! Such the harsh contrast to the surrounding area that I had to grab my camera and capture it! I stood below the banana flower and was mesmerized by the intricate details of the blooms. How they were protected by the harder pink petals. Their lips curling back too revel the banana nectar.

From Jeremy Jones of Living the Dream RTW

This one is one of my favorites from Amsterdam. Look up at the statue of Anne Frank in-front of the Anne Frank House / Museum. This was my first photo taken at an extreme angle and taught me the importance of looking at things differently with a camera.

From Laura and Lance of Travel Addicts

This was taken on the travertines of Pamukkale in central Turkey. We visited this section of the travertines twice that day. In the afternoon, the sun was too high and we couldn’t capture any of the rich texture of the ridges and folds. Later, on our descent, the sun was setting and casting enough shadows for us to catpure the moment.

From Brent of Brent’s Favorite Photos 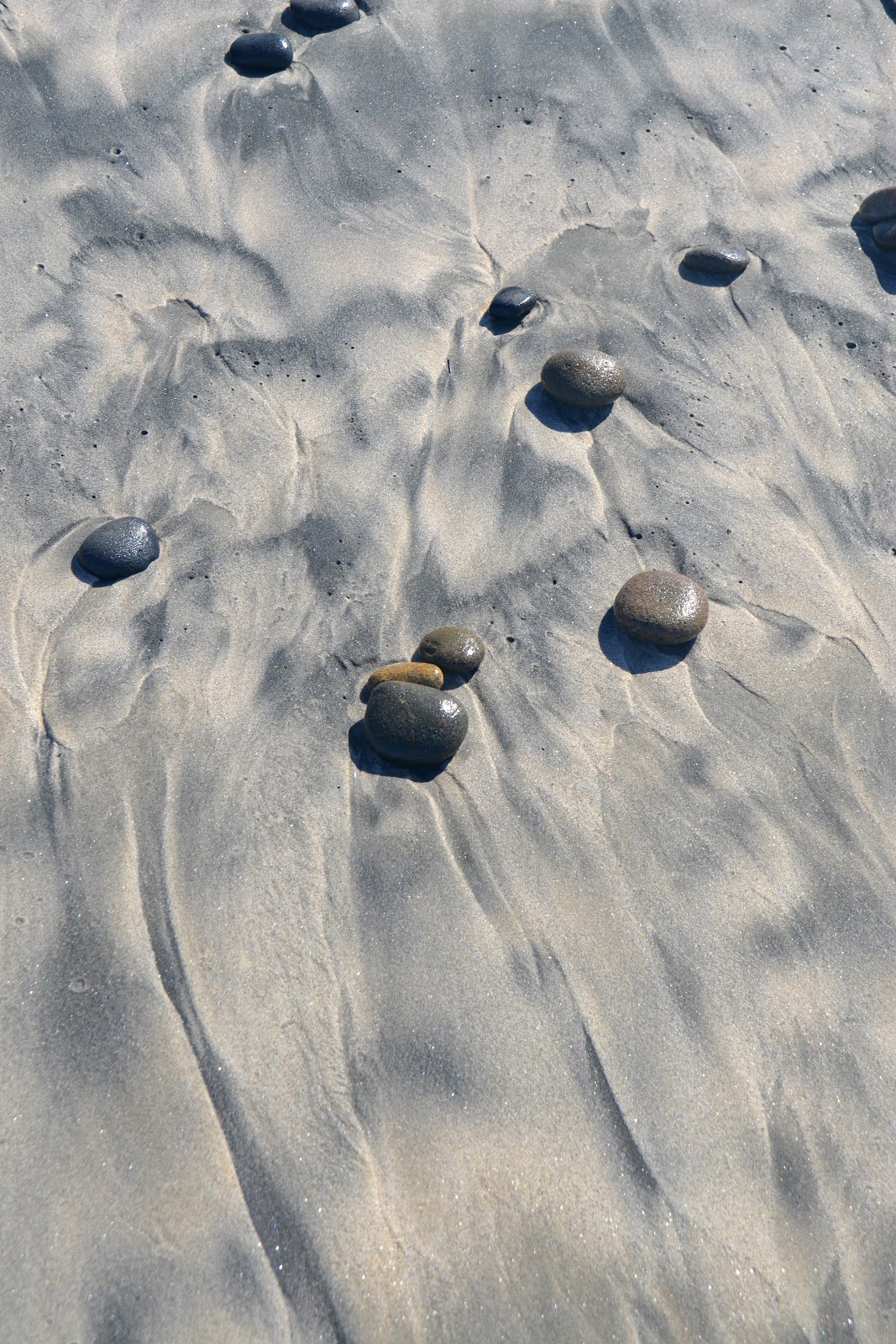 My options were limited for this unique topic. This shot is from Oceanside, California. After a long day playing at the beach, my wife pointed out to me how beautiful the sand was when the sun hit it and it turned gold. The next morning, I ran out to take some photographs before we left.

From Denise of Life As A Bus Stop

The picture I am submitting today was taken in Budapest. Famous for its Art Deco buildings, I managed to get inside one of them. The building was filled with Art Deco furniture and decorations, one of them being this ceiling lamp. I remember looking up and thinking that it would make for a pretty picture from a different perspective.

From Melissa of Linguist on the Move 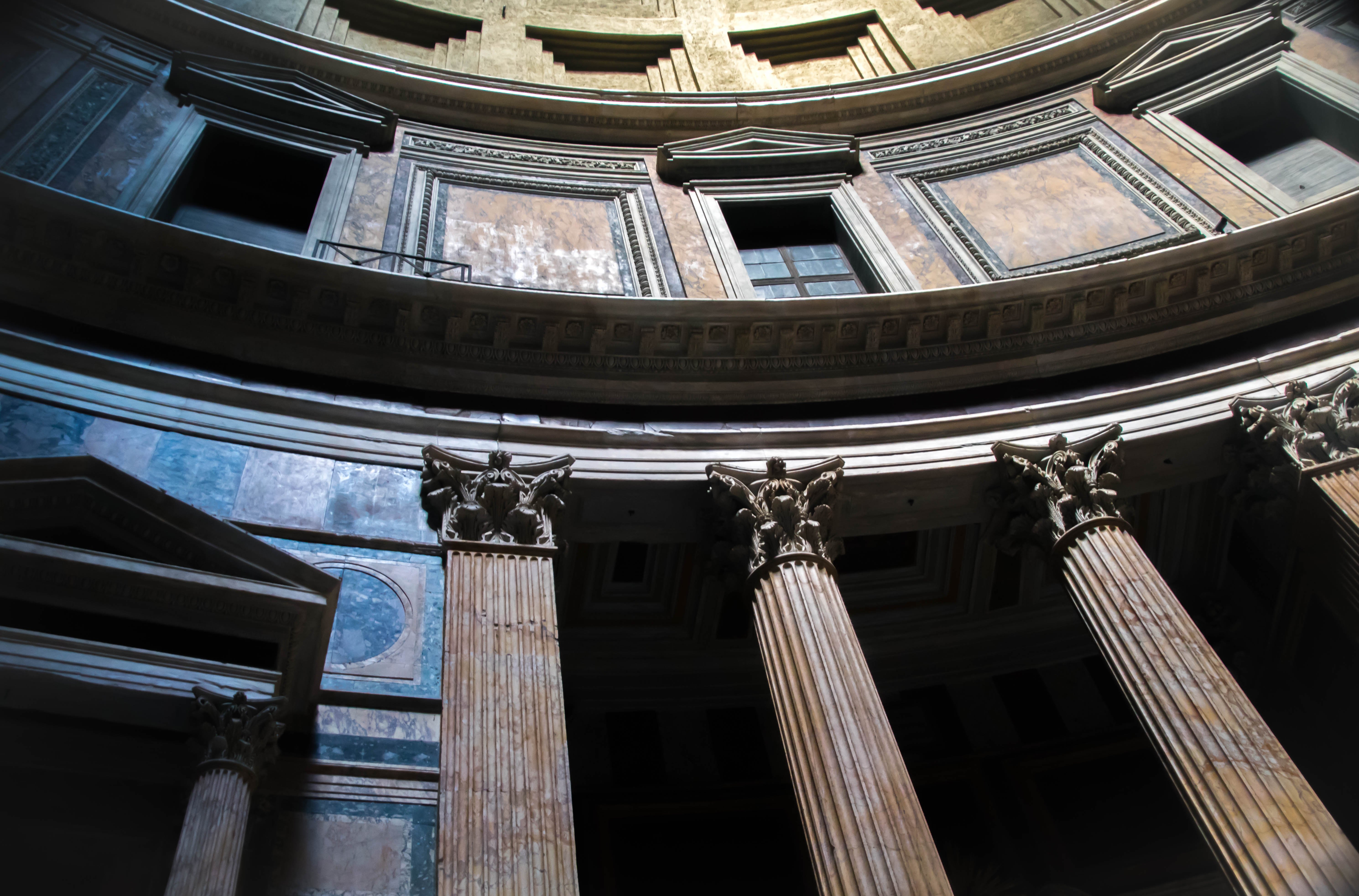 This one was taken from inside the Pantheon in Rome and, because there were what what seemed like millions of other visitors there and it’s a heavily photographed building, I knew I wanted to get a unique shot and therefore had to change up my viewpoint. For this shot I had to lie down entirely. My friend stood over me so my head wouldn’t get stomped on by any of the other visitors, and I definitely got some looks. As anyone who has visited knows, the ceiling to the Pantheon is open, so I had some nice, natural light streaming in – the aspect I love about it the most.

From Suzanne Fluhr of Boomeresque

This photo is of the mural “Morning Star” which is painted on a domed ceiling over the stairs in the Canadian Museum of Civilization in Gatineau, Quebec, across the river from Parliament Hill in Ottawa. The mural is by artist Alex Janvier. Leaning back on the stairs in order to be able to shoot straight up at the mural was a little scary.

From Greg Goodman of Adventures of Goodman

From Emily and Scott of Twelve Countries

While in Paris I tried to take pictures of well-known places in different ways. This shot ended up being one of my favorites, directly underneath the Arc de Triomphe. I had to lay down to get this shot just right—thankfully there’s not much tourist traffic at 8am. The symmetry in this building is incredible, and hopefully this picture captured it well.

From Yasha and Juergen of Dare 2 Go

Taken in the Tatacoa Desert in Colombia. The stick, a dried bit of cactus, was just laying there = it’s not an arranged photo.

Past Photo Roulette Winners and Hosts

The following is the winners table list from the past four years of photo roulette.  As mentioned above, the host of each round won the previous round and continued the game with their chosen theme.