Most major cities around the world have distinct areas that are known for great people watching, amazing food, and a distinct vibe that gives you a sense of the communities living there.  Toronto is lucky enough to have two of these interesting and diverse neighborhoods smashed together creating a great area to walk around sampling the local fare and absorbing the local culture. The Chinatown neighborhood in Toronto is one of the largest in North America, in part because it also includes other East Asian cultures like Vietnamese and Thai. This is great news for anyone looking to walk around and nibble as they go.  As food is such a big part of travel, this is an excellent area to head to around lunch or dinner time for anything from dumplings to duck to noodles.  Spadina Avenue and Dundas Street West are the two streets you’ll want to spend most of your time on. 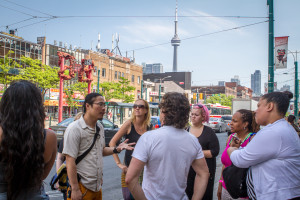 A group tour of Chinatown, just walking distance from the famous CN Tower.

Due to changing demographics and its proximity to numerous colleges, the area residents have become much more multicultural.  While this is great for people watching, the area may gradually lose it’s cultural draw, as can already be seen with some of the oldest BBQ shops in the area having closed over time.  Best to get out there and see it before it changes even more. Relax, have a beer and strike up a conversation just about anywhere in Kensington Market. 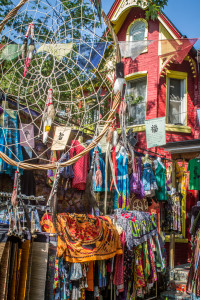 Right next to Chinatown is the area known as Kensington Market, one of Toronto’s most well known neighborhoods.  Full of diverse street art, shopping, cafes and more, this area is fantastic for roving around on a photowalk. Rough borders for this area are College St. on the north, Dundas St. West to the south, Bathurst St. to the west and Spadina Ave. to the east.  Agusta Ave and neighboring streets have the best to offer. Being such a popular place for locals and tourists alike, Kensington Market plays hosts to numerous festivals, cultural events and street performers.  A great place to see what’s going on around the area, and in Toronto in general, is the community section of Kijiji – Canada’s version of Craigslist.

Be sure to budget enough time wander thoroughly around both of these areas.  You won’t want to miss the street art, fantastic food offerings, and random encounters that these neighborhoods have to offer.  I’d suggest grabbing a traditional Bánh Mì sandwich at Nguyen Huong Food Co. at 322 Spadina Ave. and grabbing something baked at My Market Bakery at 184 Baldwin Street.