Who wants to get absolutely filthy, conquer a few dozen obstacles and run a total of twelve miles in wet socks? Now who wants to do it at altitude while competing with thousands of others?

Ryan, my brother, and some friends recently completed the Spartan Beast at Soldier Hill in the mountains of Utah. Â The six of them paid for the privilege of going through this grueling form of torture, and for some of them it was even a repeat experience. Â I tagged along to see what it was all about and managed to take a few pictures along the way. About The Spartan Race

The first Spartan race was held in Williston, Vermont at the Catamount Outdoor Center in 2010. Â There were about 15-20 obstacles and about 500 people participated. Â The world championship is still held in Vermont and is one of the most anticipated races of the year. Â Spartan Race has become one of the biggest race brands in the country with over 65 Spartan races being hosted worldwide in 2014.

Spartan races vary in length from 3+ miles (the Spartan Sprint) to 26+ miles (the Ultra Beast) with the Super Spartan (8+ miles) and the Spartan Beast (12+ miles) falling in the middle. No matter what length you run or where you place, you earn a medal just for completing the race. Â You can even earn a Trifecta medal by completing a Spring, Super and Beast in a single calendar year. The rope climb is considered the hardest obstacle to complete at a Spartan event.

An estimated one-third of participants travel in from outside the area, with more making the trek out to Vermont for the championships. Â The Trifecta weekend in Hawaii also draws in a larger percentage of travelers.

Obstacles include multiple wall climbs, mud crawls under barbed wire, pushes, pulls, hoists and even a spear throw. Â The hardest obstacle for most tends to be the rope climb, which there were two of at the recent Beast.

The Spartan Beast at Soldier Hollow that my brother just ran attracted an estimated 6,700 people. 90% of them completed a total of 29 obstacles and covered just over 12 miles, including 6,000 feet of elevation. Spartan’s bucket carry involves filling a bucket with rocks and carrying it up a hill and back.

The winner of the day was an elite athlete who finished the entire course in an hour and forty-one minutes. Â To put that in perspective, it took my brotherâ€™s group a about six-and-a-half hours to finish.

After watching Ryan and friends complete the race, I can sort of see the appeal. Â Who wouldn’t want to act like a big kid and complete all those obstacles? Other parts, however, I’m not sure I’d be able to get over, such as running almost half a marathon in wet socks.

Have you ever run in one of these kinds of races? Â Would you sign up for a Spartan Event?

In Ryan’s group there were three couples that ran the race. Â Ryan and Maria, Jason and Jinyi, and Rachael and Mike. Â This was Ryan’s X race but Maria’s first. Â Jason and Jinyi had done one race before, a “sprint” in Malibu last year. Â This was also Rachael’s first time doing any kind of Spartan race while her husband, Mike, had previously completed two beasts. One competitor’s shoes after exiting one of the muddy obstacles.

Jinyi: “I do spartan because it’s badass.”

Jason: “I do it for an escape from the normalcy of everyday life. I’m not saying my life is boring; I have a wonderful Wife and two wonderful children that I cherish everyday with. However, I feel like doing a Spartan Race gives me a opportunity to ” release” part of the normalcy from my life. Doing the Spartan Race with Jinyi is also an added bonus; it helps solidify our willingness to be by each other’s side no matter what we face (rope climb). Also, signing up for a race gives you a reason to not be lazy throughout the year.” The cargo net obstacle was done over one of the muddier pits of the whole course.

Rachel: “This was my first race. I did Spartan because my husband has done 2 Spartan Beast and I was always been envy of him.”

Ryan:Â “I do spartan because it is physically and mentally challenging. The type of course and variety of obstacles is not something I get the opportunity to do often. It is fun to try to set personal bests for time or to do with a group of friends. It is a great event because everyone on the course is striving to achieve the same goal and everyone helps/encourages each other. There is a level of camaraderie among all participants, not just the friends you are running the course with.” The tire pull obstacle involves dragging a tire until the rope is taught and then dragging it back to the start.

2) How did you get started?

Jason: “I first heard about it from Ryan a few years ago and thought he was crazy for doing it. I remember him saying ” it was the hardest thing I’ve ever done physically in my life.” Then last year a friend at work asked if I wanted to do the Malibu Sprint, and after researching it, Jinyi and I agreed to sign up. I was pretty nervous leading up to the race, but once on the course, we had a bitching time.”

Ryan: “I heard about Spartan from a coworker 4 years ago. We were talking about obstacle course racing and he told me to check out their website. Spartan was holding their first race in Utah that summer and I got hooked. I’ve done everyone that’s come through since.” When you can’t complete an obstacle during a Spartan race, you have to compensate by completing 30 Burpees (pushup + jump = 1 burpee).

3) What is the hardest obstacle for you?

Jason: “The rope climb….I can never get past the second knot.”

Ryan: “The two hardest obstacles for me are the javelin throw and the second rope climb. I think the most difficult part is the distance of the race and fighting the heat.”

4) Would you ever travel to Vermont for the Ultra Beast?

Jason: “With the right amount of training, I would love to complete the Ultra Beast. I hope Ryan still wants to do it in 2015.”

Ryan: “The Ultra Beast is definitely a goal for me. It seems hard to achieve when thinking about how tired I was after the beast this year. I plan on signing up for the 2015 Ultra Beast; it is easier to train for something after you have already paid for it.” A long mud crawl under barbed wire is the last major obstacle of most Spartan races.

5) What else along these lines do you want to do?

Jinyi: “I want to do the sprint to complete my trifecta.”

Jason: “I plan on doing three to four Spartan races a year. Malibu has a great course and I hope to do that Spartan Race every year.”

Ryan: “I try to run any kind of obstacle race that is held close to where I am at. They are always fun and challenging in some way. I also like to run Ragnar. Spartan is by far the most challenging race I have participated in so far.” 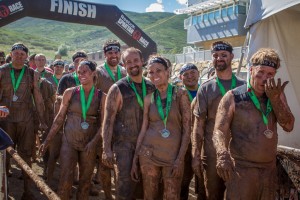 6) what’s your favorite and least favorite part/aspect of the race?

Rachel: “I love the challenges of the obstacles and experiencing it with my husband and our close friends. Least favorite part was trying to clean all the mud off at the end of the race.”