The best possible trip you can take to get away from Los Angeles is a quick two-two hour drive south to San Diego.Â  Ideal weather, terrific beaches, interesting neighborhoods and activities that cater to adults as well as families make it a great place to visit to get away from of the big city craziness that is Los Angeles.

I grew up in Los Angeles and, when I decided to move, my first choice was San Diego.Â  I lived there for six years, two of which were spent going to college to finish my degree.Â  There are many more aspects of San Diego worth seeing than I have the space to go into, so Iâ€™ll only be focusing on the highlights.Â  This will be part ofÂ a blog carnival (see the bottom of this post for more) with the â€œNearcationâ€ theme, i.e., vacations that get you out of your city but are close enough that you arenâ€™t spending much money to get there. Â Iâ€™ll be approaching this as if youâ€™re a first time visitor to the city of San Diego.

Of anywhere Iâ€™ve been, I believe that San Diego has the best weather in the world.Â  Take advantage of it and hit the beach.Â  If you surf, wake up early and head out to Blackâ€™s beach with the other pros.Â  If you want a mix of everything, including an upscale neighborhood and an art museum, make your way to La Jolla Cove.Â Â  And if youâ€™re in a party mood, head to Pacific Beach for a smorgasbord of restaurants and clubs right at the beach. 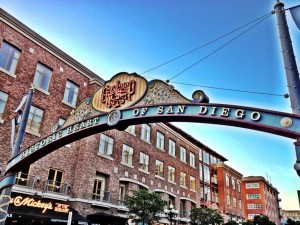 For neighborhood exploration, your first stop should be downtown, affectionately called The Gaslamp Quarter.Â  Right near the convention center, this area is filled with shopping, eateries, galleries, theaters and bars.Â  Unless you plan on spending the day shopping, put this on your list as something to do after the beach or a day at the zoo.

Another neighborhood worth mentioning is Hillcrest.Â  While La Jolla Cove and Pacific Beach are draws because of their proximity to the beach, Hillcrest is a trendy neighborhood that might be a mix of Silverlake, Melrose and West Hollywood rolled together.Â  Again, the highlight here is a bit of shopping, getting your drink on, listening to some live music and people watching. If you want to join in on the music, you can always find local teachers to help increase skill.

Lastly, if you have never been to Sea World, or youâ€™re visiting San Diego as part of a family group, you should spend one of your two days with either the fishes or on safari.Â  The Wild Animal Park isnâ€™t exactly a â€œzooâ€but it is as close as youâ€™ll come to going on Safari without actually taking a trip to Africa.Â  Sea World is a no brainer and is still interesting to this thirty-something, especially now that Iâ€™ve recently acquired my scuba certifications. Whatever you decide to do, making the trip to San Diego really isnâ€™t all that difficult or expensive.Â  If youâ€™d prefer not to drive, you can take the Pacific Surfliner train down.Â  It connects with the trolley system, which can get you to some of the spots I have mentioned.Â  Basically, if you canâ€™t afford a plane ticket for the next three-day weekend or vacation youâ€™ve got coming up, you can still get out of the city and spend some time exploring a different part of California.Â  For my international readers, I would highly recommend allotting a minimum of two days for a trip to San Diego.Â  Youâ€™ll be thrilled you did.

As I mentioned above, this post is part of a themed “blog carnival” that is taking place today, June 1st, 2012. Â Basically, about a dozen of us bloggers got together and wrote posts based on the theme “Nearcation” (a vacation that’s near you – get it?). Â You can read more about the carnival with the host at The Lost Backpack, and I’ve also listed, and linked to, the other people participating in the carnival.

Just over the hill from Wellington is the very New Zealand combination of wild rugged coastline and fine wines. Whatever your budget or interests there is something for you in the Wairarapa, and all under 2 hours drive from home!

There are quite a few benefits to living in Perth, Western Australia, the most isolated city in the world – and one of them is that a typical “nearcation” is to hop on the ferry to idyllic Rottnest Island, just an hour away.

In 1772 there was a partition of one European country by its neighbours. A mere 30 years before there was a boy born in a poor family in France. Both events are related because this boy grew up to be one of the greatest botanists in the world and he came to spend a great part of his life in a partitioned country. The result today are the beautiful Kairenai botanical gardens.

When you think of southern France do you conger up an image of vine covered countryside and Plane trees along the Canal du Midi winding its way towards the Mediterranean Sea? Do you dream of sun bathed afternoon walks, a baguette under arm and sandy coast lines? With so much tradition and culture for tourists to sample, the south keeps visitors coming back back for more.

Most Aucklanders live well outside the city centre, only venturing in for business or a night out. There’s plenty to do during the day though, especially when you’re out exploring the sparkling Waitemata harbour. Find the best things to do in Auckland harbour.

One of the coolest things about living in Portland is that so many great places are within reach; the ocean, the mountain, the desert.Â Â But sometimes itâ€™s good to get farther away, to a place that is a little moreâ€¦theatrical. Ashland is a great escape with entertainment that can take you to other worlds.

My kids arenâ€™t quite turned on by the image I hold of myself as an intrepid Saharan explorer. So we load our little tent, sleeping bags and some coolers of food and drink into the car and hustle a quick two hours north on Highway 522 from our home in Taos, New Mexico, into Colorado and to the 85,000-acre Sand Dunes National Park and Preserve.

Extremadura is a part of Spain that few people know about. But only an hour away from busy Madrid, Extremadura makes a great choice when traveling in Spain. Visit the charming town of Trujillo to see its gorgeous castle and taste world famous Torta de Caser cheese. If you prefer something bigger try the capital, CÃ¡ceres, to see its perfectly preserved old town. Finally, head down to MÃ©rida where the Roman ruins rival those of Rome, without groups of tourists getting in your way.