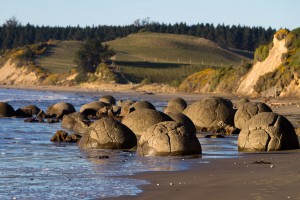 The Moeraki Boulders as the tide comes in along the coast of New Zealand.

The last few days on the bus were mostly filled with scenery instead of activities.Â  We woke up in Dunedin and had a long drive up to the base of Mt. Cook, New Zealandâ€™s tallest mountain.Â  The stops along the drive included the Moeraki Boulders, large, marble-shaped boulders on the beach, the Victorian town of Omaru and a few lakes.

We arrived at Mt. Cook about 2:30 in the afternoon – enough time to go on a walk if we were interested, but the ground conditions made that a bit treacherous without crampons for the ice.Â  Most of us took a look around the information center and spent the night playing bar trivia in the tavern of the lodge.Â  Split into two teams, our bus took first and second place, earning a bar tab which was quickly tapped. The view of the Mt. Cook ranges from the edge of Lake Takepo

The following morning was bright and early as we had a lot of ground to cover to make it to Ringitata.Â  Stops along the way included photos of Mt. Cook from the edge of Lake Takepo (humorously pronounced as â€œtake-a-pooâ€) and a lunch stop where you could opt for ice skating or tubing. Normally this leg ends at Christchurch, but due to the earthquake damage still being repaired, Stray is putting people up at a private river rafting lodge for the time being.Â  In the summer, youâ€™d probably spend the afternoon rafting.Â  Our bus, on the other hand, spent the time mountain biking, hiking and lazing the afternoon away in front of a movie.

My last day on the bus was the leg from Ringitata through Christchurch ending in Kiakoura.Â  Because Christchurch is still a major start/end for many of the Stray passengers, we had a long drive this morning without any stops.Â  This is mostly so we can get people to the airport in time for planes and also pick up new passengers just starting out.Â  From Christchurch it was a straight shot to Kiakoura where I hopped off the bus for the last time. A few Stray passengers headed for a Dolphin Encounter.

Since the bus stops for only one night in Kiakoura, we have to get in early enough for the passengers to do the optional activities here, of which there are many.Â  The day we arrived, myself and three others raced over to the Encounter Kiakoura center, dropped our gear and got suited up to swim with dolphins.Â  Let me tell you, this was one of the highlights of the entire trip.

Swimming with Dolphins, Whale Watching and Fishing are the three most promoted and interesting options among many in Kiakoura.Â  Itâ€™s a small community on the coast that has a lot to offer and Iâ€™m sure is very crowded in the summer.Â  Though the water was supposed to be freezing, I opted for the Dolphin Encounter where you put on a wetsuit and get to snorkel with the dolphins. Some of the gigantic pod of dolphins we had the privilege to swim with.

It took our boat about 45 minutes to find track down the dolphins and previous to this experience, Iâ€™d always thought a pod of dolphins was a small group, maybe maxing out at 20 or 30 as a large pod.Â  What we saw when we got out there was a group stretching out as far as you could see.Â  At the end of the day, the staff estimated about 600 to 700 dolphins in this pod.Â  Crazy.

The water was so cold that it was a shock to the system the first time the fourteen of us on the boat jumped into the water.Â  Iâ€™d like to say you get used to it, but itâ€™s always cold, just not so bad after a while.Â  The 9mm wetsuit keeps you fairly warm and so buoyant that youâ€™d have a hard time getting under the surface. The tale of a humpback we passed along our way to the dolphins.

The dusky dolphins were great – very playful and curious about the surface dwellers making â€œeee-eee-eeeâ€ noises under the water, as suggested by the tour staff.Â  Theyâ€™re so maneuverable in the water that if you manage to touch one itâ€™s because they wanted you to.Â  You get about 10 -15 minutes in the water before the boat calls you back up and maneuvers into position to drop you back off in front of the pod.Â  After about five dunks, the wetsuits come off and itâ€™s time to get warm and take pictures as you head back to the harbor.Â  If youâ€™re lucky, youâ€™ll even catch sight of a whale as we did on the way out.

The following morning, I waved goodbye to the bus and the few people I still knew that were headed north.Â  An hour later I was heading back out to sea, this time with Gerry.Â  If you are seeking an authentic local experience, you canâ€™t get closer than this.Â  Gerry isnâ€™t exactly retired, but heâ€™s moved on from his previous career as a businessman.Â  He now lives in Kiakoura and does fishing trips with the stray travelers that come through the small town. Gerry holding one of the 6 crayfish we pulled up from his traps. These are as big as lobsters and taste incredible.

When you go out, you can expect to come back with enormous crayfish and whatever you can catch with a rod.Â  As we went out, the wind created swells too large to safely manage so we turned back after gathering crayfish from a few traps previously set.Â  We went back to Gerryâ€™s house where we cooked up the crayfish and snacked on one while Gerry began pouring wine from a winery where heâ€™s partially invested.Â  Later, the Manuka Honey came out, of which heâ€™s also partially invested in.

Spending the day with Gerry and a few of his salty fisherman friends, one of whom has quite a few shark stories to tell as evidenced by a few missing limbs, was really a great experience.Â  Yes, it would have been better had we actually been able to fish, but drinking the day away with a few locals and a few travelers seemed a great way to end my free time in New Zealand.

Activity: Kiakoura Dolphin Encounter & Fishing with Gerry (only with Stray)

Go back and read aboutÂ what happened the previous day. Two things you see a lot of in the south island - sheep and snow covered mountains. A Sealion scratches an itch near the Moeraki Boulders. Stray passengers at the boulders.