Just like travel, the idea of climbing to the top of a mountain has an adventurous feel to it.Â Â  It certainly isnâ€™t something one does regularly, and I am now fully aware just why that is.Â  Factor in whatâ€™s involved – getting to the mountain, climbing the thing, doing whatever you plan to do on top, and then making your way down â€“ and youâ€™re in for quite an experience. 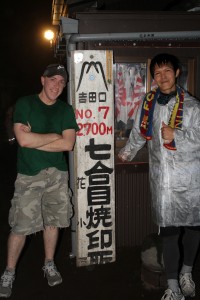 Koji and I about a third of the way up the mountain.

I decided to celebrate the end of my teaching job in Japan with the romantic idea of climbing Mt. Fuji.Â  I had convinced Koji, my Japanese co-worker, to make the climb with me, and the day after I finished my job we were on our way to the mountain.Â  Three trains, one bus and seven hours after we left, we made it to Kawaguchiko 5th Station â€“ the starting point for the climb.Â  We arrived at 8pm and decided to wait an hour before climbing to try and make sure we were getting acclimated to the altitude.

One of the major concerns with the climb is avoiding altitude sickness, symptoms of which include headache, fatigue, stomach illness, dizziness, and sleep disturbance.Â  I find it hard to believe that you wonâ€™t feel some of these during a 6-hour, 1,471 meter (4,828 ft), midnight climb.Â  There are â€œmountain hutsâ€ along the climb during the peak season of July to August that provide a place to rest in addition to food and water.Â  The higher you go, the more expensive things get, so itâ€™s best to bring food, water and oxygen, if you feel you need it, with you. A captive audience waiting for a sunrise that, unfortunately, never showed it's face.

We started the climb at about 9pm and reached the summit at a little after 3am.Â  Roughly two-thirds of the route up is loose gravel and rocks while the rest is more like climbing, so gloves are a good idea.Â  Also, it gets much much colder as you get higher, so bring warm clothing for the summit.Â  At the top, there are a few places to buy souvenirs, get some food and hit the head.Â  Thereâ€™s even a post office if you want to send your postcards with a Mt. Fuji postmark. As proof of your climb, you can pay to get a brand imprinted on your walking stick that states the date of your climb and the height of Mt. Fuji.

After taking care of a few odds and ends and waiting for the sunrise, which we couldnâ€™t quite see due to heavy cloud cover, we started our descent.Â  My lack of sleep and general fatigue from getting up there conspired with the loose gravel all the way down to make it a difficult undertaking for me.Â  Needless to say, I was grateful when we finally made it back and all I wanted was some rest.Â  It was a grueling 14 hours, but Iâ€™m proud of myself for having completed something I never really saw myself doing.

Nothing like an early morning climb down a mountain.

How bout you? What’s the next mountain you plan to climb (literal or metaphorical)??

Happy Anniversary! â€“ One year down, four years to go.

Happy Anniversary! â€“ One year down, four years to go.