Cairns is the epicenter of options for diving the largest reef system in the world â€“ The Great Barrier Reef.Â  A world heritage site and one of the seven natural wonders of the world (as named by CNN), this destination is high on the list of many travelers, and is certainly a spot not to be missed when visiting Australia.

I had the opportunity to experience the reef with three different companies out of Cairns.Â  The longest trip, a four-night jaunt up to the Coral Sea with Mike Ball, came first.Â  Upon returning to Cairns, I took a day of rest before jumping aboard another boat with Pro Dive. Some of the colorful coral out on the reef.

Strategy for The Great Barrier Reef

Iâ€™m going to diverge for a second and discuss how I think you should approach spending time on the reef.Â  First off, donâ€™t just spend a single day out there.Â  Thatâ€™s like going to Paris, Rome or New York for a day and saying youâ€™ve really seen the city.Â  Nonsense.Â  Take your time and spend at least 3 days there â€“ not in and around Cairns, but on the reef itself.Â  Youâ€™re doing yourself a disservice if you only spend a day and then move on.

Now that Iâ€™ve got that out of the way, the reef is mind-bogglingly huge, and getting on a liveboard will let you spend the most time out on the water and, hopefully, diving.Â  It would be best if you arrive already knowing how to dive, as this would allow you to spend your limited time enjoying the reef and not learning as you go.Â  That being said, you can easily learn how to dive when you get there, and it is worth the time and money to experience a whole new world under water.Â  You could see the reef via snorkel, but you miss out on many of the interesting coral and other animals (turtles, sharks, rays, etc.) that live more than a few meters under the surface.

In addition to letting you stay out on the water longer, you get to access parts of the reef further away from Cairns.Â  The further you get, the healthier the reef and, generally, the more animal life you see.Â  I had a strange experience where I did a long liveaboard where we visited a remote part of the reef and then later did another liveaboard with Pro Dive much closer to Cairns.Â  The same species of fish that would scatter as you approached in the remote areas seemed much less skittish during the Pro Dive liveaboard.Â  I canâ€™t prove it, but I suspect they were much more used to seeing divers in the water because there is SO MUCH diving going on close to Cairns. 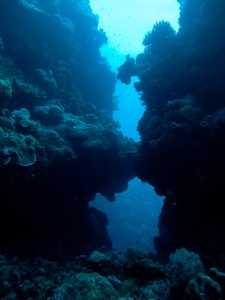 A swim through 10 meters under the sea.

Dive the Reef with Pro Dive

With so many companies operating classes, day trips and â€œshortâ€ 2-3 day liveaboards, it can be difficult to know whom to go with.Â  Pro Dive has, arguably, the best reputation of any dive company in Cairns and should be your first choice for this reason alone.Â  When youâ€™re dealing with people and equipment that could affect your safety, go with someone you trust.

I didnâ€™t do any classes with them, but out of 27 guests on my 3-day liveaboard trip, 19 were doing open water classes and one was doing his advanced open water class.Â  The rest of us were fully certified and buddied up for our own dives.Â  The only real group dives were the night dives, which was totally fine with me as Iâ€™d only done two night dives before then.

One piece of advice â€“ try and make sure youâ€™re traveling with another diver you can buddy up with.Â  One of the drawbacks of doing this kind of trip solo is the â€œqualityâ€ of your buddy.Â  I had great luck during the Mike Ball trip, but then I was the least experienced during that trip and everyone on that boat was great.Â  During the Pro Dive trip, I split my time with the guy going for his advanced cert, who hadnâ€™t dived in a while and didnâ€™t listen very well to the staff or during briefings, and a German guy who didnâ€™t speak very good English and hadnâ€™t dived in two years.Â  I went from being on one boat where I was the relative newbie to leading two others during our dives. The spots we visited with Pro Dive were fine, but werenâ€™t up to the caliber of what we saw at the Coral Sea, but thatâ€™s to be expected.Â  The three-day trip is offered just about every day, so these dive sites are seeing dive and snorkel traffic every day or every other day, and the reef shows it.

I also believe that because the majority of the boat was filled with new divers getting their first certificates, we didnâ€™t visit dive sites that might have been more interesting to more advanced divers.Â  I hadnâ€™t thought about that beforehand but it makes total sense and is something to consider when booking your trip.

Average Boat but Plenty of Food

The boat was smaller than the one I took up to the Coral Sea with Mike Ball, and made do with six crew, half the amount of the Mike Ball crew.Â  Most of the rooms are set up with bunks while a few appeared to be double beds set up for couples.

There were also a few maintenance issues that would have made the trip a much better experience.Â  My bedroom lamp didnâ€™t work, one of the showers really should have been replaced and forget about staying on the salon level (where my room was) in the afternoon.Â  It was like a sauna in there on the return trip to Cairns, and I got no real response from the crew after asking if they could fix the heat or turn up the air conditioning. 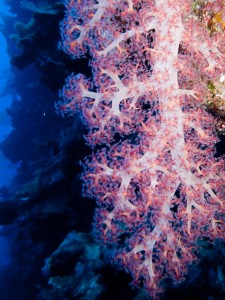 A piece of soft coral is illuminated by the flash of the Camera.

Food was about what youâ€™d expect for buffet-style brekkie, lunch and dinner.Â  The good news is thereâ€™s plenty of it and always something to snack on after every dive.Â  Water, tea and coffee are free all day, but anything else you have to pay for and remember to bring your own alcohol on the boat as they donâ€™t sell it.Â  Internet on the boat was also a nice surprise.

I was probably a bit spoiled coming on board the Pro Dive trip two days after doing the Mike Ball trip, but I couldnâ€™t help but compare the two.Â  The Pro Dive trip was 3 days, 2 nights and visited a part of the reef pretty close to Cairns and so sees a lot of dive activity.Â  The Mike Ball trip was 4 nights, 5 days and went all the way up to the Coral Sea, a region that doesnâ€™t see nearly as much dive traffic.

At time of print, the Pro Dive trip costs $680 with taxes and the Mike Ball trip costs $1751 for the budget option.Â  At almost three times the cost, Mike Ball is an option many people will pass over for more affordable trips.Â  If you canâ€™t afford to get far out on the reef with a group like Mike, where the whole experience is very high quality, then I recommend going with Pro Dive.

From all the options I investigated, which were many, Pro Dive offered a good variety and, again, has the highest reputation of any of the 3 day / 2 night operators out of Cairns. This reputation is even more important if youâ€™re going to be doing classes since safety should be one of your primary concerns. Peek-a-boo - A diver peeks through a natural hole in the coral.

If I were going back and had didnâ€™t have the funds to go with Mike Ball again, Iâ€™d definitely book something with Pro Dive, as long as I was seeing or doing something new.

One Tip: Instead of renting a camera from whichever company you decide to dive with, stop by the WetRez Camera shop and rent from there. Â You can rent all manner of cameras for days at a time at a better rate than any of the boats I looked at. Â This worked great for me the whole time I was in Cairns.

DISCLOSURE: Â I HAVE NEGOTIATED A DISCOUNT WITH BOTH GREYHOUND AND YHA, BUT WILL BE GIVING AS HONEST AN EVALUATION OF THE TRIP AS I AM ABLE. Â I ALSO RECEIVED A DISCOUNT ON THE PRO DIVE TRIP.