The world cup is on and almost everyone I know is glued to their seats, which is interesting when you consider that the only time anyone in the US cares about soccer is every four years. I’d guess that the Olympics and the World Cup are the only two sporting events that are truly global in nature.  But then, I have never been much of a sports guy.

For those of you not from the states, it is very common for young boys and girls to join soccer (aka. football) teams.  So common, in fact, that the term “Soccer Mom” paints a very vivid picture in the minds of most Americans.  My brother and I were part of the soccer masses as kids and while he went on to play sports throughout school, I didn’t get along well with my coach and ditched sports in favor of other activities.  I would guess this is the point where I gave up on caring about sports in general.  However, as a cultural or social activity, I’m all in. 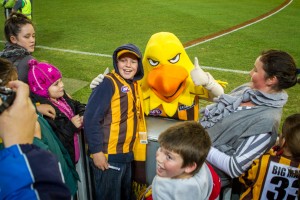 Kids gather around the Hawthorn Hawks mascot during an sports match in Melbourne.

Sports is one of those subjects that almost anyone can connect with on some level. Just about everyone knows the rules to most of the popular sports, even if you don’t follow what is currently going on. I know how to play soccer even if I don’t really care what the current status of the game is.  This level of familiarity is great because you can head out to a game with friends, or new travel companions, and enjoy it even if the nuances of rivalries and whatnot are lost on you.

This is why the World Cup and the Olympics are such great sporting events. Most of the world knows how the game is played and can find someone to route for.  Almost anywhere in the world you can head to a local watering hole, grab a drink and get caught up in the hysteria.  I was living in Japan during the 2010 World Cup and watched the Japanese matches projected at a small local bar with my Japanese co-worker and 30 of my new best friends.  You can’t help but get caught up in the frenzy and hysteria in that kind of situation. I understood about 80% of sport’s rules about halfway through the game.

International Sports as an Experience

In a new country and don’t know the rules to a sport? That’s Great! Round up a few locals and head out to watch while they explain what’s going on. Better yet, buy a ticket to a game and make some new friends at the stadium. I did this in Melbourne because I wanted take in a bit more local color through Aussie Rules Football. I had a great time learning about the game while watching the Hawthorn Hawks take on the Geelong Cats.

My first trip outside the states was your typical summer backpacking trip through Europe in 1999.  During that trip my friend and I were staying at a hostel in Budapest when an English guy we were hanging out with really really wanted to go play Cricket.  He managed to round up eight or so of us from the hostel and we headed out to the first open patch of grass we could find.  He spent the next 3 hours attempting to instruct us on rules and vocabulary while we botched runs and generally fumbled about. I remember having a blast but walking away without really understanding much about the second most popular sport in the world. The amount of ceremony involved in a Sumo match was the most surprising thing about the experience.

Wildly popular sports can be fun to watch and discuss on occasion, but I’m more interested in the hyper-local, culturally unique sports you find in certain countries.  Sumo wrestling is a great example of this.  Highly respected across the country of Japan, this sport can only truly be experienced by going to a match and taking it all in.  The colors, characters and ceremony involved produce an event like nothing I’ve ever been to.  In their own way, the same thing can be said about spectator sports like Muay Thai Kickboxing and Jai Alai.

These types of sporting events are distinctly not global and incorporate cultural aspects into their very essence. Doing a little research is a good idea so have some idea what to expect.  Be that as it may, I would start chatting with other spectators for the detail and nuances that can only come from a fan.  Along the lines of what I’ve been saying, if you’re planning on visiting the United States any time soon, make time to attend a baseball game.