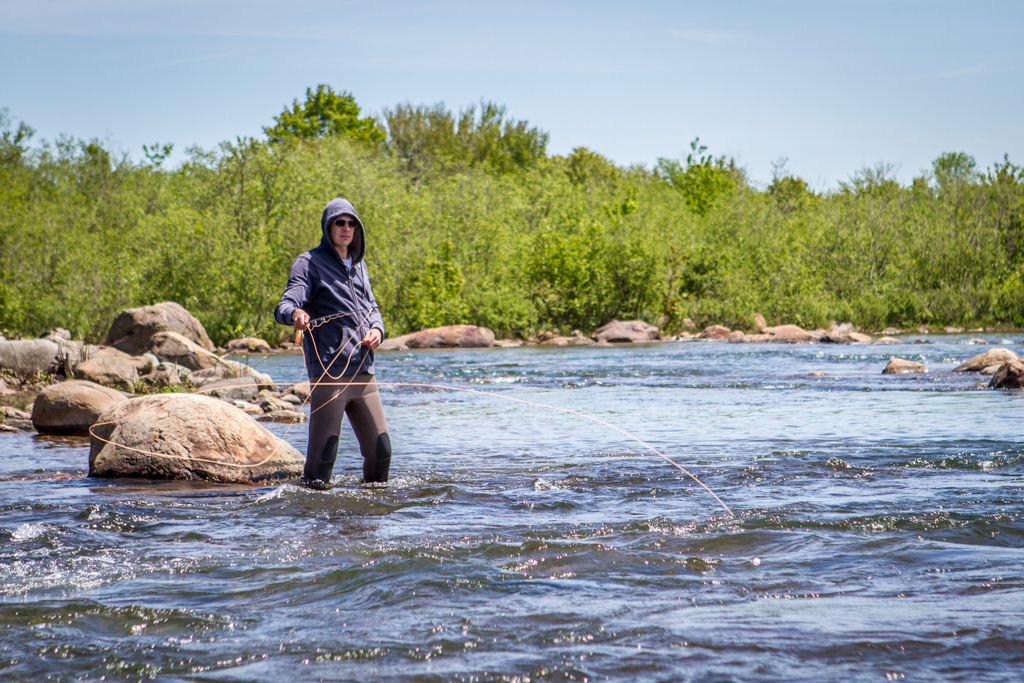 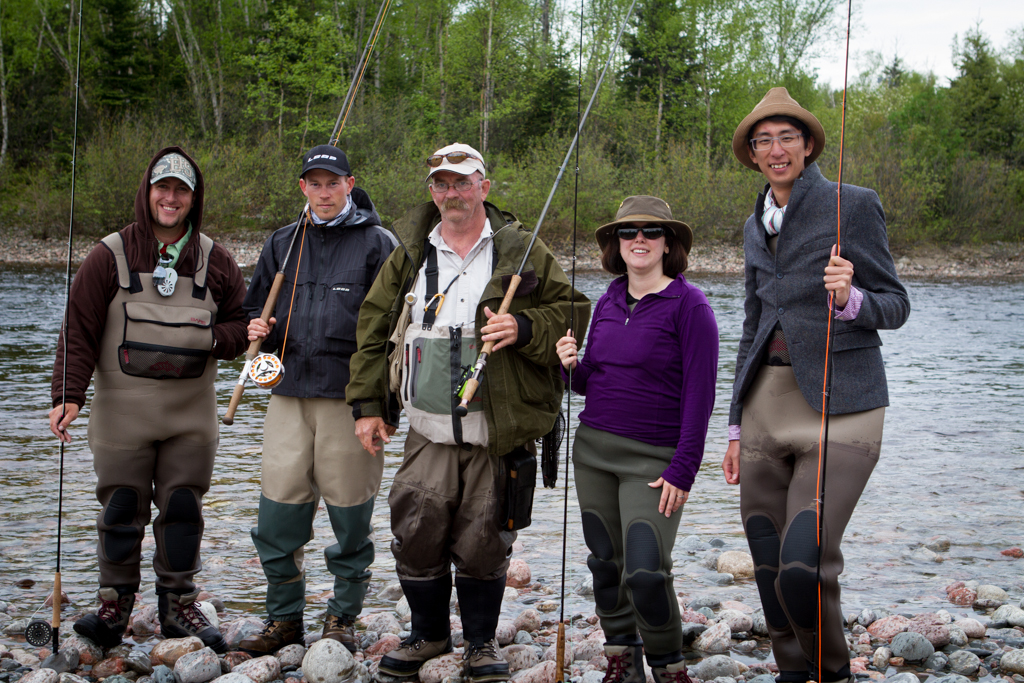 There’s nothing like uniting against a villain to bring together a group of strangers.  While we might not have been a fellowship on our way to destroy a magic ring and save the world, we were an international group of media makers headed into a foreign land to do battle with another species.  Battles were won and lost, one comrade was almost swallowed by nature and a good time was had by all. It’s always nice being at an airport so small you don’t bother with gates.

Our journey started in the Billy Bishop Toronto City Airport which, it should be noted, is not the main airport for the city of Toronto.  It is the headquarters for the Porter Airlines, a regional carrier and also the catalyst for a strong bond between a group of relative strangers.

There we were, a group of five travelers who knew little, if anything, about each other, all converging in the airport lounge for a trip that wasn’t arranged by any of us.  We had all been invited by Tourism Ontario and the Algoma Kinniwabi Travel Association to go Fly Fishing, an outdoor experience so ruggedly Canadian I couldn’t say no.

I had only just started up a conversation with Amy Moore (@EverywhereAmy), the first member of our group I’d run into, when we heard the announcement that our 3:45 flight had been canceled.  A few minutes later our group was assigned to the 8pm flight, was given vouchers for food, and had set up a mobile office in a corner of the lounge.  Over the next five hours we bonded over talk of Toronto and past travels.  As in practically any piece of literature, there’s nothing like a shared enemy to bond a group of strangers. Dima’s order of Maple Pecan Chicken started a running theme for the week. I couldn’t help but wonder why almost everything that had maple also had nuts, preventing me from trying anything due to my allergy.

Though we arrived almost four hours behind schedule, the only thing we had missed was a trip to the Canadian Bushplane Heritage Centre.  Not being an aviation geek like Amy or Dima Zemsky (@notsupposedto), I wasn’t too broken up about it.  We were, however, all very hungry.

After surviving on lounge coffee, snacks and the three pieces of fruit our vouchers would purchase, we all wanted a real meal and headed to Docks Riverfront Grill for a late dinner.  Sitting on the edge of St. Mary’s River, the restaurant offered pretty standard fare with a few peculiarities like the Maple Pecan Chicken, which was ordered by a third of the group.  Dima, in particular, became captivated by the maple and would order anything remotely maple related during the rest of our trip.

Full and fatigued, we checked into the City Center Travelodge and retired for the evening. By retired I mean we caught up on email, took a nice long bath and, most importantly, watched the “big” episode of this season of Game of Thrones (you’ll know what I mean if you follow the show).  The room was clean, spacious and I wanted of nothing during my stay.  Altogether a nice break from the 6 bed dorm room I’d spent the previous week adoring. 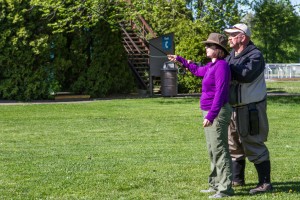 We got off to a rolling start the following morning with a brief breakfast, a quick stop to get our fishing licenses, and then out to the park to meet up with Brad Hodkinson, owner of the Soo North Fly Shop and our fly fishing instructor.  Brad, and his assistant, Joe Nelson, set us up with waders and boots before teaching us the basics on the grass.

We all had a turn at the fundamentals, which basically involves moving from the shoulder and trying not to use your wrist.  Not knowing how this would all work in the water, we each had a go for about 5 minutes before heading out into the nearby rapids of St. Mary’s River (river capitalized?). Dima demonstrates how you throw your line up river and let the current slowly take the fly downstream.

We split into two groups, Dylan Lowe (@travelingeditor), Chris Williams (@realmantravels) and myself all heading out into the middle of the river with Joe while Dima and Amy stayed on the riverbank.  We separated a bit, chose our flies from those provided by Joe and spend the next three hours attempting to refine our technique.  Like everything else hard in life, Brad and Joe made it look easy, only it was anything but.

The purring of the water and the late-morning sun made simply being out in the river a pleasurable experience.  Cool and clean, we could see the fish everywhere, and it was only a matter of convincing one of them I was a fly.  At least that was the theory.  Stroke after stroke I tried and ultimately came up empty. 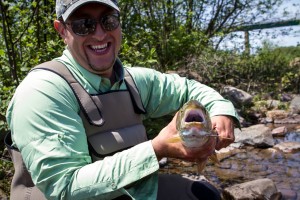 Chris Williams caught the most fish over our two days on the rivers of Canada. Here was his first catch of the trip.

Chris was the only one who managed to hook and catch a fish.  Dylan managed to hook a couple but wasn’t able to bring one in.  I couldn’t hook a thing, but Joe passed me his rod with a fish he’d hooked and let me fight it in.  That was just a taste of what the sport was all about.  Many of us could have stayed all afternoon, but the group decided to head in a bit of food and bodily relief. One of the planes at the Bushplane Heritage Center.

A bit of lunch at a local eatery was quickly followed by a quick nap.  Our afternoon outing took us to the Canadian Bushplane Heritage Centre that we’d missed the previous day.  Picture a giant warehouse housing all manner of bushplanes, roughly 30 in total.  I’ll admit some of the planes were interesting, although not knowing too much about them, or planes in general, I was a bit out of my element.  However, if you are nuts about aviation, but all means be sure to stop here if you’re in the area.

After a little tutoring in forest protection heritage and the history of the bushplane, we were off to dinner at Aurora’s Westside restaurant.  Aside from Dima’s obsession with anything and everything maple, the running joke of the trip was that Sault Ste. Marie was the pizza capital of Ontario.  Aurora’s happened to be a pizza joint, but only a couple of us actually opted for pizza.  A broad set of menu options lead to ribs, pastas and pizza being ordered followed by slices of cake and pie. The most fashionable of the group on the water had to be Dylan, who kept his tweed coat and colorful scarf on at all times.

Our evening ended with a stroll along the riverside boardwalk watching the sun decent into the horizon.  Though I’d suggested we head out for a few drinks, we ended up grabbing a few expansive photos of the river and the intriguing items along the boardwalk.  The day had started out gorgeously sunny and had quickly cooled off to the point we kept our evening short and retired early in anticipation of a long day of fishing.

We left the Travelodge on our third day in Algoma Country and headed up to Batchawana Bay to check into the Lakeshore Salzburgerhof Resort.  We took a little time to check in and gawk at the handmade flies that Joe and Brad had brought in to show us. Each of these was hand made by Brad and I don’t doubt are expertly done. They all look outstanding and often involve exotic materials.

Much time, effort and money was put into the creation of each fly we were using. Clearly, the craftwork put into each unique piece was both art and skill.  It was evident that both Joe and Brad took much pride in their work, and displayed it all proudly.

As we’d only had a few hours out in the water the previous day doing what we came to do, we elected to pickup some sandwiches for a later lunch and headed out to the Agawa River.  High water levels had limited our choices but we would have been happy with anything I’m sure.  We quickly split off into groups again with Amy, Dima and I heading off with Joe down the river while Brad took Chris and Dylan with him upstream. When I asked Joe to pick his favorite fly, here’s what he showed us.

The weather had a bit more gloomy feel to it which, when combined with the black flies made day two a bit more miserable than our first day out on the water.  Dima called it quits pretty soon after we started, but he was dealing with other issues related to the fit of his boots and how they didn’t quite fit his 6’8” frame.  The rest of us kept at it for quite a while, with Amy, Joe and I moving up to join the others after having no luck.

The three of us had a quick bite and then positioned ourselves across the river from our Sensei and the two most successful members of our group, who had both been triumphant earlier that day as well.  Amy and I, determined to catch something, persisted for a while longer until Amy, attempting to head back in my direction, slipped on a rock and took a little bath in the Agawa.  I managed to grab her and stay upright, but her little tumble brought a conclusion to our trio’s efforts.

Our cottage at the Lakeshore Salzburgerhof Resort.

We crossed back to the other side and shortly afterward called it a day.  On our way back to the resort, we took a few detours to grab some scenic shots and stop at the Canadian Carvers – basically a souvenir shop and general store. Maple ice cream was had and maple syrup was employed as a coffee sweetener.  Most importantly, we bought drinks for later and headed back for dinner.

The best meal, by far, was had at the Lakeshore Salzburgerhof.  Our last real meal of the expedition, we were treated well and enjoyed traditional Austrian cuisine.  I went with the time-honored Wiener Schnitzel while others had the Zigeuner Schnitzel, the whitefish and Dima had the Maple glazed salmon.  Service was outstanding, setting was superb and the food was wonderful. Chris says goodbye until next time.

After-dinner drinks were downed by the campfire adjacent to the back cottage.  Just like meeting fellow travelers halfway around the world, we took the opportunity to tell tales about past travels, laugh about the past couple weeks in Canada and discuss dreams and plans for future travel.  We started out bonding in an airport lounge over free coffee and packaged food and ended connecting over drinks at a campfire on the shores of Batchawana Bay, Ontario.

Note: Please click on the images to see them in all their glory