A couple weeks ago I shared five surreal experiences as part of my 2nd year “travelversary”.  I had intended to share ten but realized it would have been far too long a post so split it into two.  Immediately after that, I went on a road trip through Western Australia and was unable to get the 2nd half up as soon as I would have liked, and do apologize for the delay.  Check out Part 1 of this article.

I arrived in Luang Prabang expecting to only spend two or three days there before  heading back south to get my visa for Thailand and traveling out of Laos.  After finding a guesthouse, I went on a walking tour of the city, like I normally do with any new place.

At the edge of the only major intersection in the city center was a sign saying that they would be having a film festival in two days.  I decided to stick around until at least the opening night to check it out, and I’m glad I did.

After the opening ceremonies, they showed a number of 3-minute short films made by local high school students.  That was followed by a documentary about two boys that grew up together in the country three hours north of Luang Prabang.  One of the boys was becoming a monk and the other was moving in with family a couple hours outside the city.

Everything I saw that night was a very different view of Laos than I ever could have gotten during the month I spent there.  Being able to watch a weeks worth of films from all over southeast Asia scratched an itch for film that I didn’t realize I had had. Members of Team Chiang Mai (a loose group of travelers living in Chiang Mai) getting foot massages at the Sunday Market.

My first stop after leaving Laos was the city of Chiang Mai in northern Thailand.  I was looking forward to the city for a few reasons.  My father couldn’t speak more highly of the city and had highly recommended it to me.  I’d also read a number of posts from other travel bloggers and flashpackers that were spending time there and I was looking forward to meeting others doing the same thing I was.

I got to Chiang Mai and it wasn’t long before I felt at home.  The city has a very mellow, “café” vibe to it and is very compact making it easy to get anywhere on foot.  A couple days after I arrived, I met “Team Chiang Mai”, a loose group of travelers and travel bloggers living temporarily in the city.

The quick friendships I made during the two weeks I spent there in December prompted a 45-day return trip in February.  I had an amazing time with some amazing people eating some of the best food on my trip.    I never expected to fit in so well with an established group and Team Chiang Mai was just what I needed when I needed it. The worldly backpackers and flashpackers that attended Christmas Day dinner at Tailek's house in Bangkok.

During my time in Chiang Mai, I had been stressing over what I was going to end up doing for Christmas.  During my search for things to do, I came across a post on Couchsurfing.org by an American expat living in Bangkok.  He was opening his house to anyone who wanted to come for Christmas Eve and Christmas day.

I arrived on the 23rd thinking I’d come early in case they needed a hand setting up.  There were already half a dozen backpackers sleeping there when I arrived and I grabbed a sleeping spot on the 2nd floor (of 5) along with a couple others from France, Belgium and Germany.

Those three days were a whirlwind, with about 15 people sharing dinner on Christmas Eve and about 30 on Christmas Day.  Couchsurfers made and ate food from their home countries, played games, drank and made merry.

The catalyst for this post in part, this was more of an awakening perception than anything else.  A good friend of mine came to visit for a couple weeks during New Years in Bangkok.  Before we left Bangkok to head south to the islands we met up with some friends of his at this place called “Bed Supper Club”.

The club was a combination of restaurant and club and wouldn’t have been out of place in Manhattan or Hollywood.  I’m sure I made for poor company that night as I was kind of in an odd state of culture shock most of the night.

I’d just spent three months flashpacking through Southeast Asia and was completely unprepared for an upscale nightclub.  Lounging on couches, drinking pricey drinks and watching the entertainment and people in attendance just wasn’t the experience I was seeking and so made for a very surreal night. 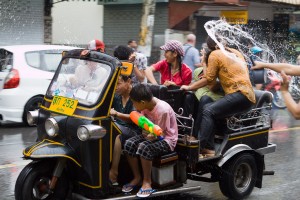 A tuk tuk races through the water gauntlet that is the streets of Chiang Mai during Songkran.

I love festivals.  More than any other time, you get to see a local people let loose and get intensely involved in something bigger than themselves.  I had two such experiences the last two years one in Japan and the other much more recently in Chiang Mai.

When I was teaching in Japan, I happened to live about an hour from the site of the Ombashira festival – a festival that only takes place every 6 years.  I had been lucky enough to not only be close enough to drive, but be there during on of the years of the festival.  You can read more about my Ombashira experience.

Just a month ago, I documented and participated in Songkran.  This festival for Thai New Year is also known for being a week full of cultural activities and, more famously, water fights.  Chiang Mai was a great place to experience the festival as the moat surrounding the city is the best source of water around.  You can see a couple photo essays from the event, one on cultural activities and the other on the water fights.

What kinds of surreal experiences have you had out on the road?